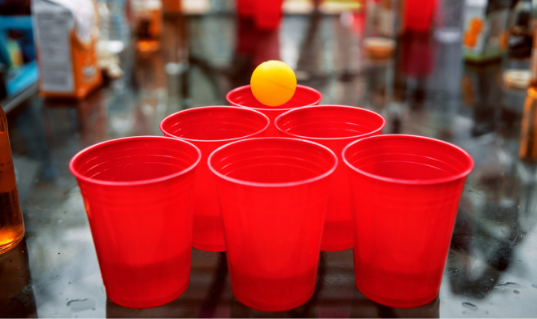 What you need: Ping pong ball, a ton of plastic cups and a keg.

How to play: Set up the plastic cups in the proper formation and set up on opposite sides of the table. If you sink a ball, your opponent has to chug one of the cups filled with beer. You can’t block the shot except on the second bounce, and each team only gets one re-rack per game.

Pro tips: Only fill the cups halfway– it makes chugging way easier and you will save a ton of beer! Also have a cup of water on the side so that you can clean the ping pong ball in between shots.

What you need: Just a drink, a deck of cards and some creativity.

How to play: Place a cup in the center of a table and surround it with a deck of cards. Set up your game by placing an empty glass or plastic cup in the center of the table. Spread an entire deck of cards, jokers removed, in a circle around the cup, face down. Each card has a separate rule, google a chart or create your own rules! Everyone playing should be in a circle around the cup and should be able to easily pick a card on their turn. A great way to pregame before heading out to the spring break bars and parties!

Pro tip: Write the rules down and keep them visible so people don’t start fighting about four being floors or girls drink or whatever.

What you need: A deck of card, alcohol and friends!

How to play: The player holding the deck aka the person to their left what the top card in the deck is. If the guess is wrong, the dealer then says higher or lower and the player guesses again. If the second guess is wrong than the guesser must drink the difference between the card they guessed and the card they drew. If the guess is correct, than the dealer drinks the card amount and it’s on to the next player. After three rounds without a correct guess, the dealer passes the deck to the person to their left and the game begins again.

What you need: Cups, a table, beer and friends.

How to play: Create two teams of equal size and give each player half a beer. When the game starts the team members at the end of the table must chug their beer, set the cup on its top and use their fingers to flip the cup right-side up. What follows is a relay race where each member of the team must finish and flip their cup. The first team to finish wins.